Pondicherry, affectionately known as “Pondy”, and now officially called Puducherry, is a city and capital of the union territory – Pondicherry – of Southern India. Pondicherry is very close to Chennai and hence it’s a prime choice of weekend getaways. Having stayed in Chennai for quite a long time, I have been to Pondy multiple times. And every time that I have stepped into Pondicherry, I wondered if I am in India or France. The French colonized the place a long time ago but some of that allure still hovers in this union territory located 150 km south of Chennai. And Pondicherry has something to offer to everyone, irrespective of age. I have been there while a student (in IIT Madras) and have partied crazily, and have also been there as a more matured traveler (that too with my family) and have enjoyed the city’s beauty. From all these amazing experiences, I have listed below a few of the things that make Pondicherry a preferred travel destination for everyone. 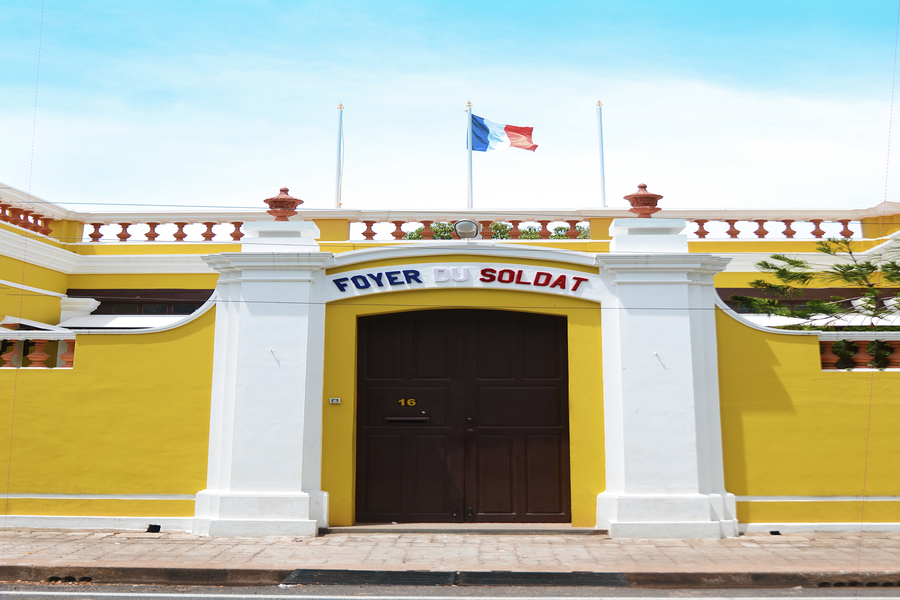 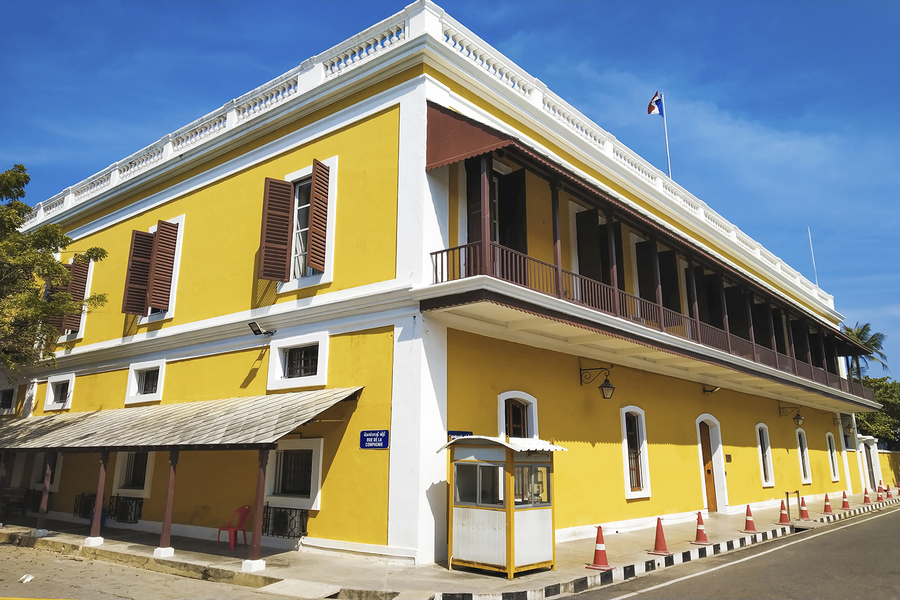 Did you know : Pondicherry was still a part of French-India even after 1947 ? Infact Pondy became a part of independent India only in 1962..!!

The French have had a strong influence on the city culture, cuisine and especially architecture. I mean, it’s actually difficult to distinguish if you are in India or France, especially in the ‘white town’. The ‘white town’ has buildings and houses lined in quiet streets that date back to the French Colonial era. An array of vibrantly colored buildings adorns the streets of this town. Every time I have been there I have stood in those streets for some time to admire the stark contrast it has with the streets of Pondy’s neighboring city – Chennai. Roaming around these French-style streets and admiring the architecture is one of my favorite things to do in Pondicherry. 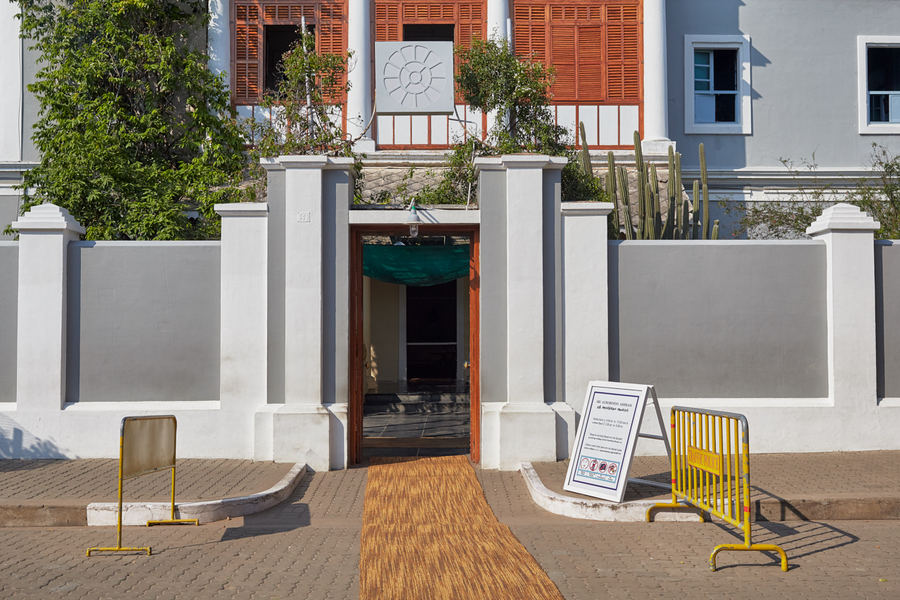 The Sri Aurobindo Ashram is a spiritual community of disciples who had gathered around Sri Aurobindo. Although it’s not a tourist attraction, it’s a very peaceful place to visit. Sri Aurobindo Ashram had played a deep role in putting Pondicherry on the world map. You can visit this place to get a better understanding of his life’s work. His samadhi is present here and also a book shop.

An important point to keep in mind: Since it’s an ashram, photography is not allowed inside. 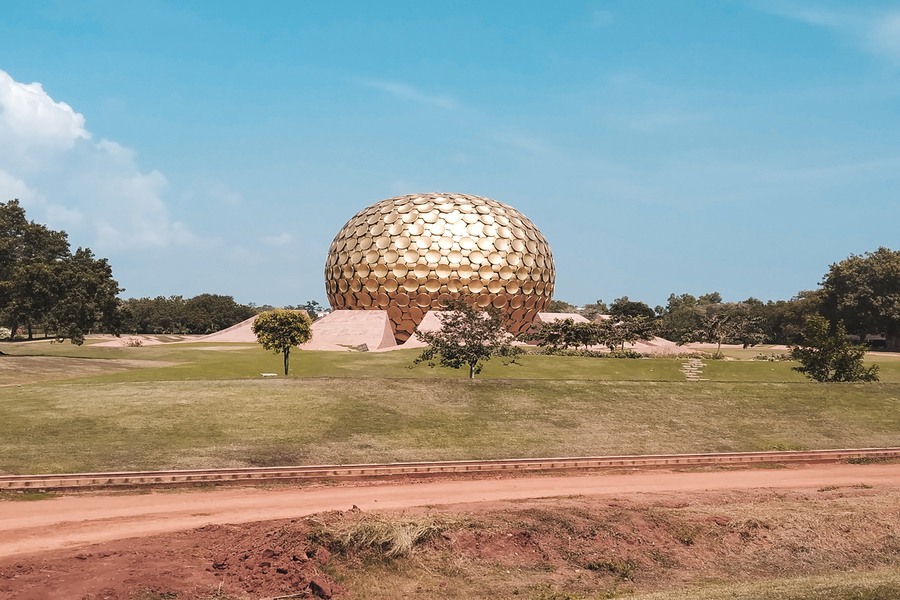 Auroville is an enchanting place. It’s actually Small Township founded by Mirra Alfassa, in 1968. Mirra Alfassa, also known as the Mother, was Sri Aurobindo’s spiritual collaborator. She aimed to build a township where people of several nationalities could live in peace and harmony. Today it is a community where everyone, people irrespective of creed, caste, nationality and class are welcomed.

At the center of Auroville is the ‘soul of the city’ – the famous Matrimandir. It’s basically a yoga center, which took 37 years to build. The orb, made of gold, is a symbol of spiritual significance to those who practice integral yoga, a philosophy which was practiced by Shri Aurobindo and “The Mother” here.

One of the most visited places in Pondicherry, Auroville is a retreat for your spiritual needs. Take a break from the world and focus on your evolution to higher spiritual beings with yoga, meditation, sermons and other activities. 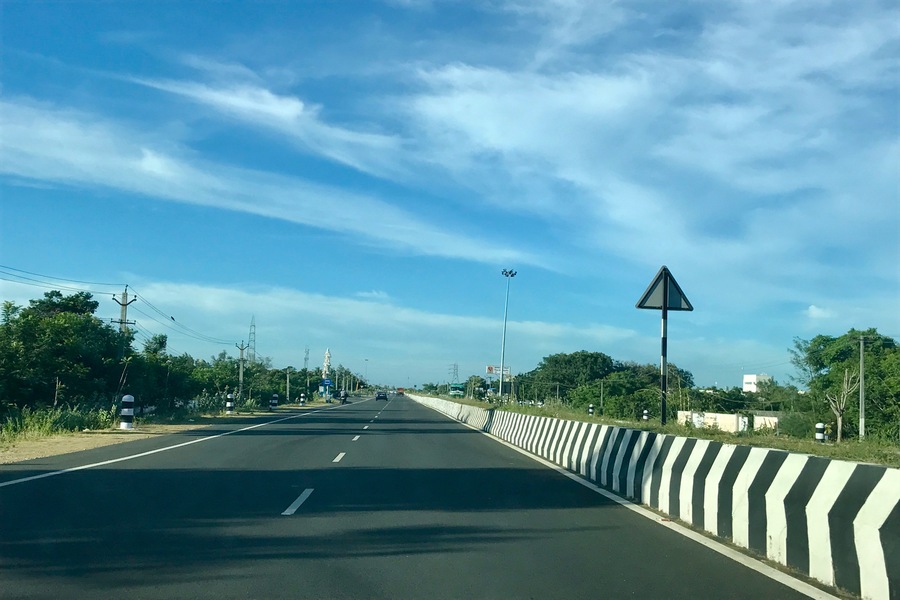 The ECR is one of my most favorite things about going the Pondy from Chennai. This is one of the most beautiful beside-the-beach highways you will ever see. And if you are a person who loves to drive (like me), trust me you will absolutely love it. The ECR, technically termed at State Highway 49, starts from Chennai and extends all the way up to Kanyakumari, all along the coast of the Bay of Bengal. 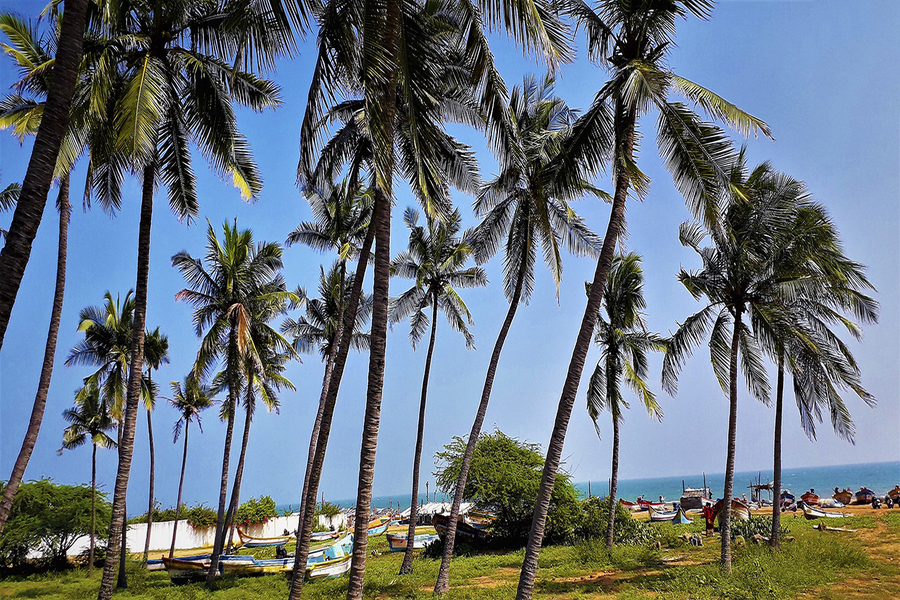 Being a coastal city, you will find vast beaches in Pondy and its outskirts. There are plenty of beautiful beaches, of which the City beach (a.k.a Promenade Beach) and the Auro beach are the most famous ones. The city beach is 1.5 km long, bordered by a long walkway. Tourists, as well as the locals, come here for a morning walk, jogging, and strolling. Vehicle entry is banned on the beach-front area during the evening, which allows people to chill out and relax in peace.

Auroville Beach, located at a distance of 10 km from Pondicherry’s main city, is my personal favorite beach in Pondy. I love it mainly because of its volcanic sands and multi-colored sea-shells. And any photography enthusiast can also look forward to capturing some breathtaking snaps at Auroville Beach, especially the sunrise. Apart from these 2, there are also other beaches like the Paradise beach on the outskirts of the city. It is one of the cleanest and best beaches in Pondicherry and it’s being maintained by Chunnambar Resort. 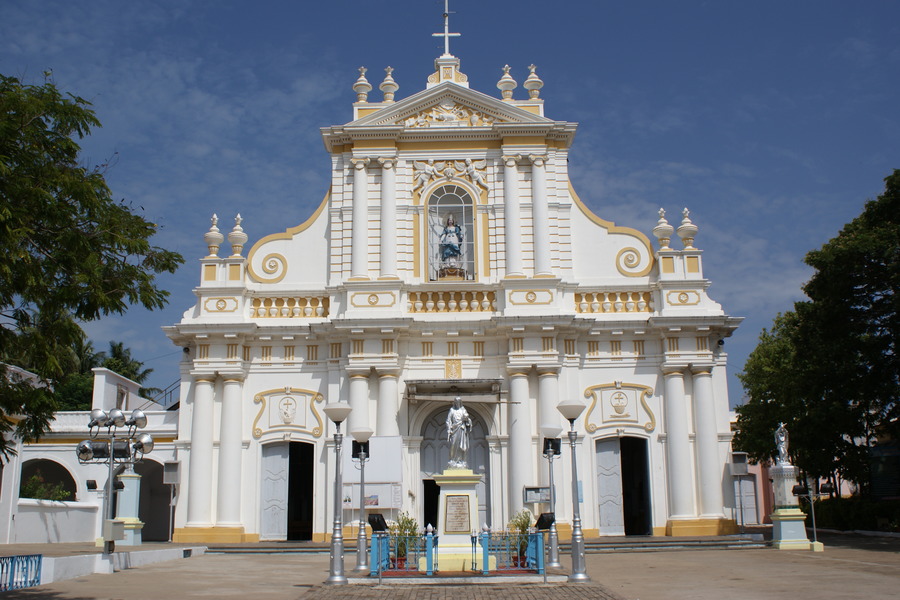 Any of you who have been to Pondicherry will agree with me (I guess) that one of the most beautiful things about the city is its churches. The architectural finesse and grandeur of the city’s churches have a unique charm of their own. An interesting thing is that since Pondicherry was home to several colonists that included the French, the Dutch, the Portuguese and the British, the churches vary in terms of their architectural designs and structures.

Did you know : There is a church in Pondy which looks very similar to the famous Notre Dame (Paris) ! 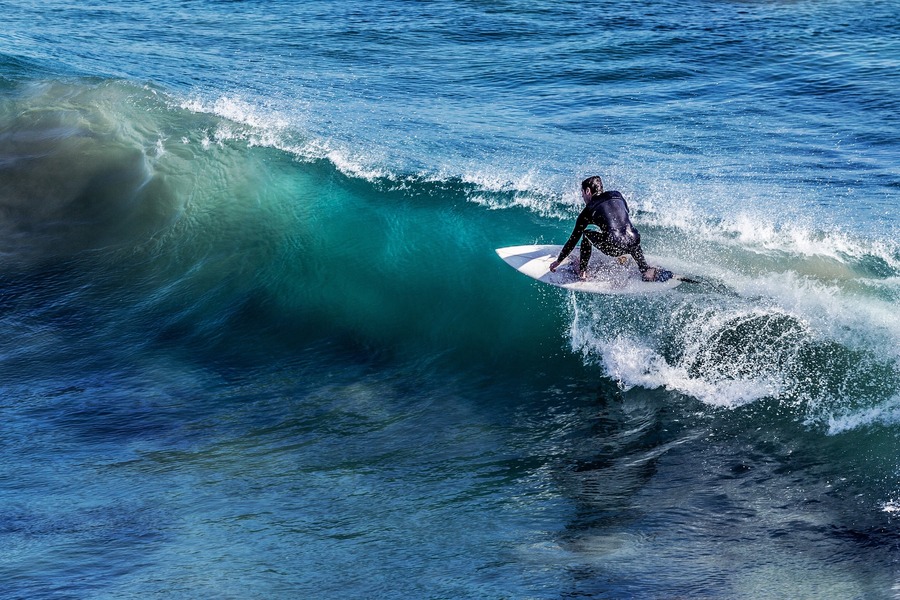 Although Pondicherry is a quaint city, it will not disappoint the adventure seeker inside you. If you are looking to try some water sports, then you are in the right place. The increasing number of water sports in Pondicherry is making it every sea lover’s hideaway. You can do diving, jet ski, kayaking among other adventurous activities. The most famous spots to go diving are coral shark reef, temple reef, the hole and four corners. And while you swim deep in the sea, you will be photographed and videographed on an action camera. 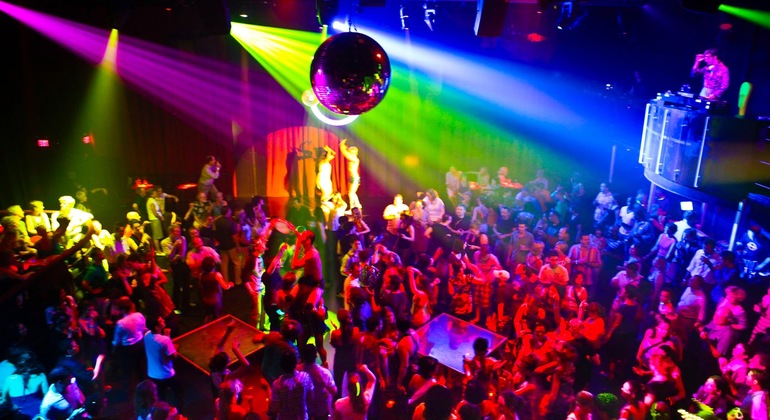 Well, to be honest, the first thing that drove me to Pondy was – cheap alcohol and crazy parties. There are certain taxes and duties on alcohol that are exempted in Pondy, making it a huge ‘attraction’, especially for a young crowd. I am sure now you know why I had said that Pondicherry is a preferred travel destination for everyone. The city indeed offers something for any mood. So, get ready to pack your bags and plan a trip to Pondicherry. 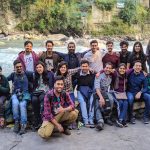 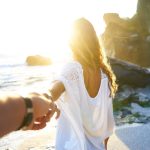