Mystical Ladakh or Esoteric Spiti? A guide to choose your next travel destination among the two arid jewels of Himalayas.

Ladakh, a few years ago was actually the most pristine and untamed travel destination with a promise of a robust journey from Delhi to Ladakh via Leh- Srinagar, and Leh- Manali Highway. A trip to Ladakh back then was more of an eccentric feeling than a mere travel destination which one would come across after conquering the tormenting but fabled mountain roads. After gaining a lot of popularity especially after Kareena Kapoor Khan rode a yellow scooter along the panoramic Pangong Tso Lake in 3 Idiots,  Ladakh has seen an exponential rise in the number of travellers visiting the locations. But more than just a Bollywood shoot location, Ladakh still is the mystical land of varied cultures, encompassing a totally mesmerizing landscape.

However, as the wanderlust kept growing, many travelers sought to find more such exhilarating destinations to satiate the travel bug in them. Hence new roads or you could say new paths were discovered that led to yet another equally pristine Spiti Valley in Himachal Pradesh.

Spiti Valley has always been more of an offbeat destination in India and is climbing up the ladder of inclination. Spiti Valley is far from becoming a mainstream tourist destination and still harbors the rustic community of Himachal Pradesh, keeping its distance from the social and infrastructural disturbance to its deeply enrooted culture. The valley still is the testament to the typical Himachali lifestyle, enormous apple orchards, and pristine landscapes.

Ladakh and Spiti, on a brief look, appear to be strikingly similar in terms of landscapes that they offer, but the resemblance is superficial. While Spiti Valley is surrounded by the rocky Himalayan peaks, Ladakh is home to numerous huge lakes and plateaus and notices infrastructural development which Spiti Valley lacks. Once you are clear on your personal preferences and travel requirements, this comparison would make it quite easy to choose between these two for your next travel destination.

The distance from Delhi to Spiti Valley is around 700 kms. You can reach Spiti Valley via Manali in 2 days, both by bike and other road transportations and via Shimla in 3 days. The only traveling option is via road. The road journey from Delhi to Ladakh would take almost the same time but for Ladakh, you can also opt for a flight from Delhi which would take only about an hour. I would suggest against taking the aerial route as you would then miss the most breathtaking views and adventures that a trip to Ladakh offers. The condition of roads leading to Ladakh is quite better than those leading to Spiti. So, the travel to Ladakh is a bit more comfortable compared to that of Spiti.

Altitude and oxygen levels are almost similar in Ladakh and Spiti Valley. Therefore, sufficient time is required to acclimatize in both places. Majority of villages in Spiti Valley are at a height of 3800m to 4500m, so emergency evacuations are a little difficult due to its remoteness. In Ladakh, most of the tourist destinations are at a height of  3500m to 5800 m above the sea level but due to the abundance of army camps, medical help and evacuation are very convenient in case of emergency.

The biggest attraction of Spiti is the lack of crowd, which allows you to have a good, deep look inside the Himachali culture. The population of certain villages in Spiti is as low as 30 people, so interaction with the local people becomes easier and pleasant. There are plenty of old monasteries that you can visit, Key and Dhankar being the most famous and largest. Apart from monasteries, you can hike up to the shimmering blue lakes, Chandratal and Dhankar. The apple orchards are a treat to eyes and the food that the locals cook from these apples (which is almost everything you can imagine) are truly delicious. For an added thrill, you can visit Chicham Bridge which is claimed to be the highest village in Asia! You can also find the highest post office in the world in Spiti and can send a souvenir to your loved ones from there!

The most astounding thing about Ladakh is the unparalleled variety of landscapes that it offers. Ladakh is a cold desert, but it offers majestic lakes, vast plateaus, and enormous mountains. Similarly, there is a huge variety in the culture as well comprising of Brok Da people, Islamic Community, Buddhists, Changthang nomads and more. There are more monasteries and lakes in Ladakh as compared to Spiti Valley, Pangong Tso and Tso Moriri being the largest lakes and you can also reach them on vehicles. The landscapes and scenery in Ladakh are unmatched. With state of the art connectivity, Ladakh bike trip is a dream come true for all bikers! It is here that you can actually witness your defense forces live in action, most of the times ensuring the safety of travelers. Trust me the kind of patriotic vibes you feel in Ladakh, it is incomparable to anywhere else in the entire country!

The infrastructural development in Spiti is minimal-there are only a few guesthouses, homestays and campsites. Spiti is all about being rustic and laid back so don’t expect any fancy hotels here. There is only one ATM in the valley once you leave Manali and just like pollution, traffic, and hustle of metro cities, internet availability is also scarce. In Ladakh, you will find a lot of guesthouses and hotels and once you reach Leh, you can find multi-cuisine restaurants and a lot of first-tier hotels.

Spiti Valley remains cut off from the rest of the country for the most part of winters! A snowclad Spiti can be seen only if a Spiti Winter excursion is planned from March to May. During these months, Spiti looks nothing short of the shoot location of Narnia! Summer booms from June to October in Spiti which is also the best time to visit Spiti Valley. The road trip to Ladakh is plausible only from June to September but thanks to flight connectivity, you can visit Ladakh during any time of the year. So the best time to visit Ladakh totally depends on your preferred landscape.

For the Offbeat adventurer inside you

Ladakh is vast and a large portion of it still remains unexplored, making it a perfect offbeat destination in India. There is much more to Ladakh than just Leh, Pangong and Khardung La, which can be explored. You can use the routes used by military bastions to reach the remote regions like Chumur, Demchok, Hanle, and Chusul. Due to lack of metal roads, the difficulty to explore the unexplored increase but then so does the thrill. Also, Spiti Valley itself is offbeat, just like Ladakh was about 10-15 years ago, so all your offbeat cravings will be satisfied.

Ladakh and Spiti Valley are similar in a way but at the same time completely different in their own ways and both have their own adventures. At the end of the day, it all depends on the kind of vacation you are looking for. I would suggest visiting both, but if you need to make a choice, I hope this comparison was helpful. 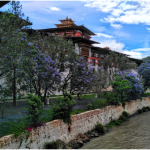 My Experience in the Last Himalayan Kingdom – BhutanTravel, Weekend Trips